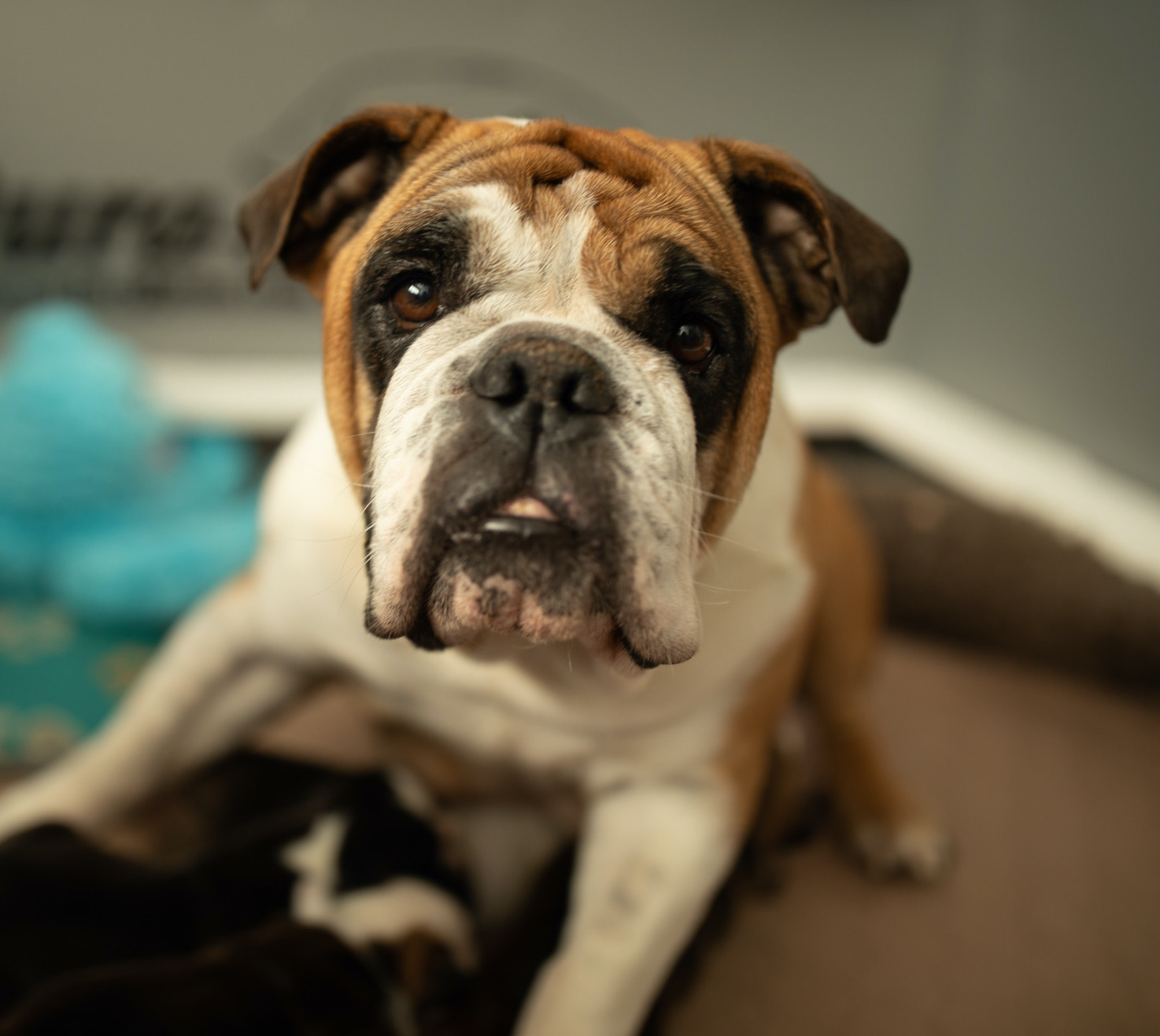 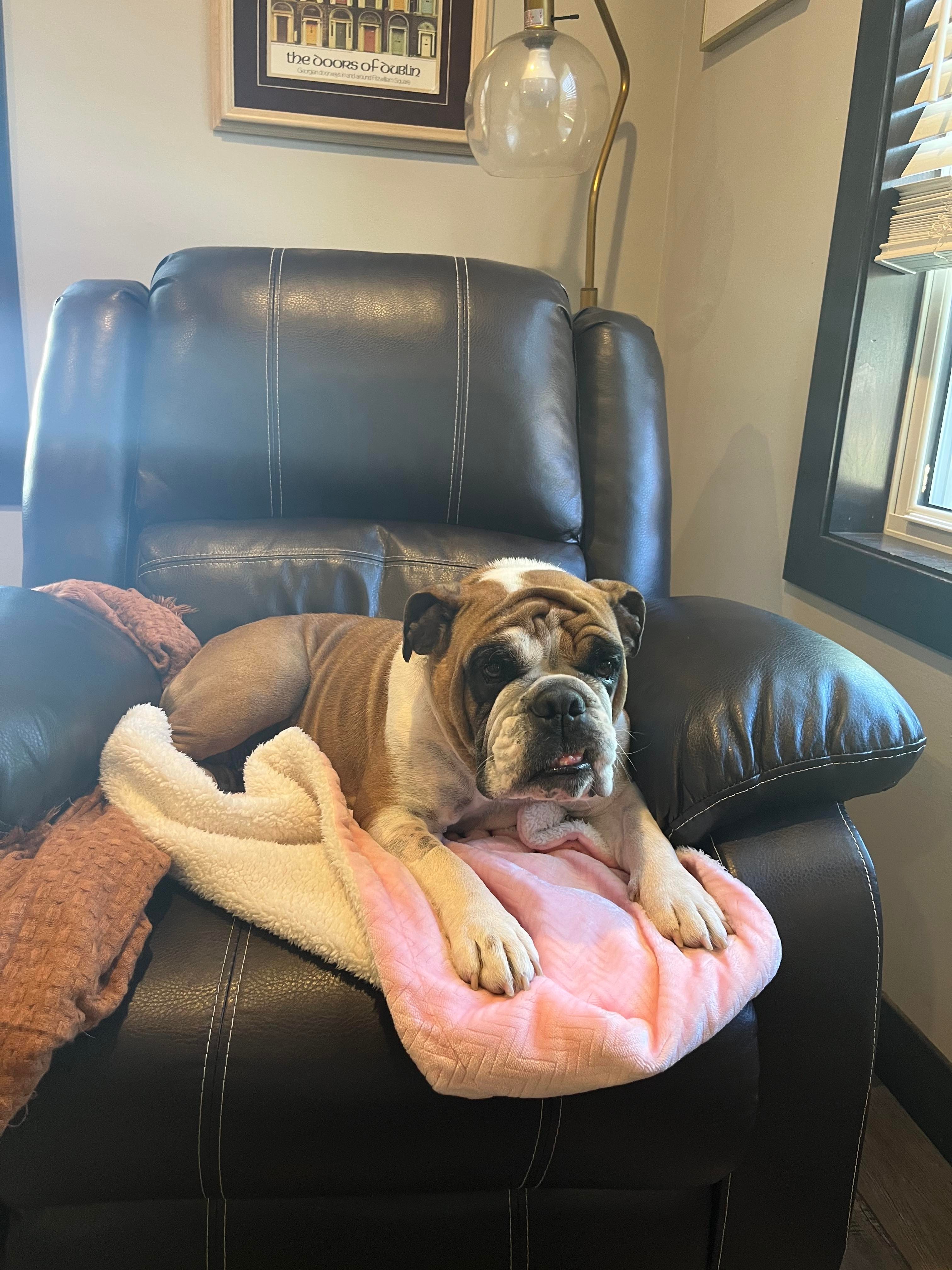 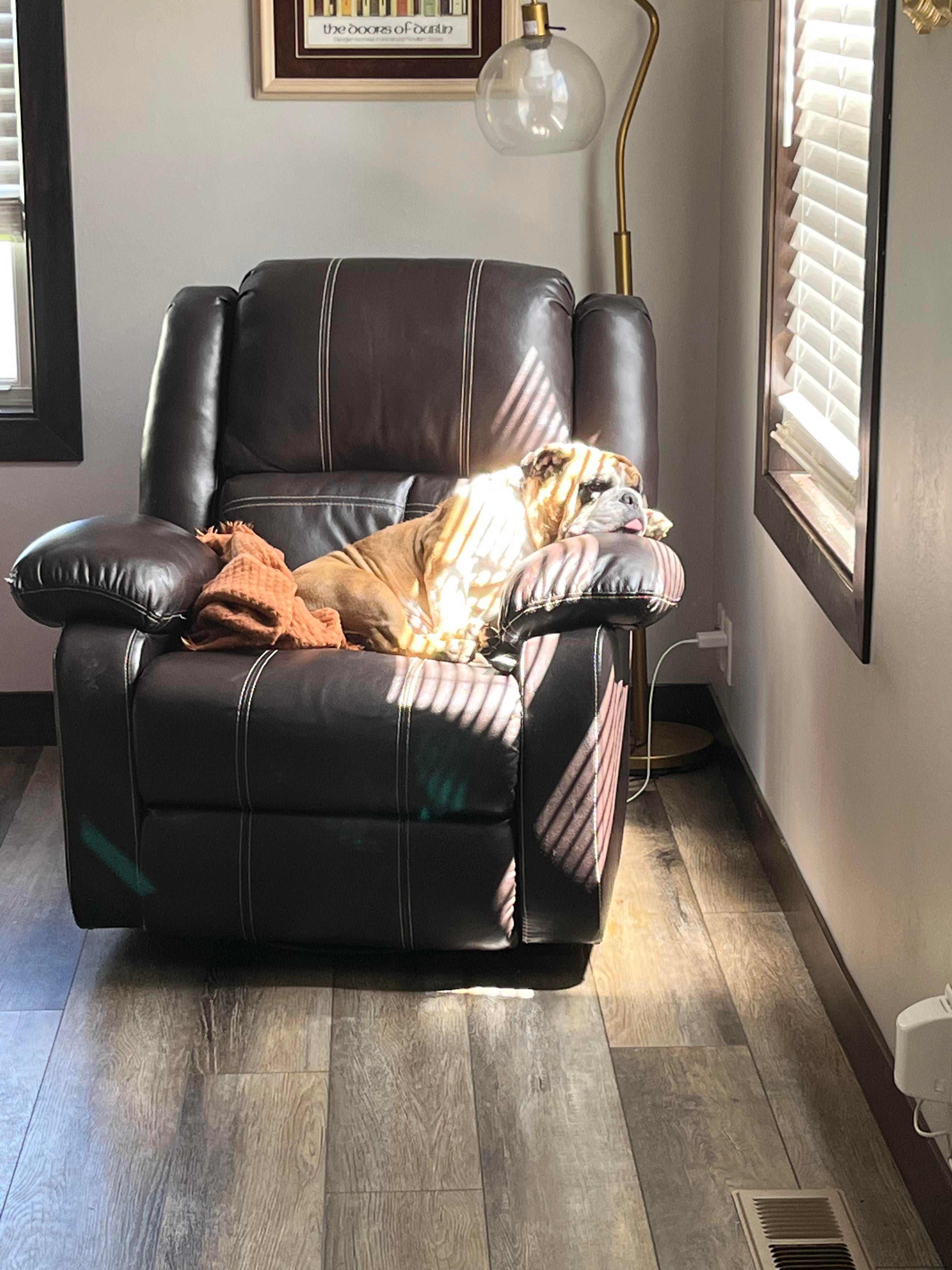 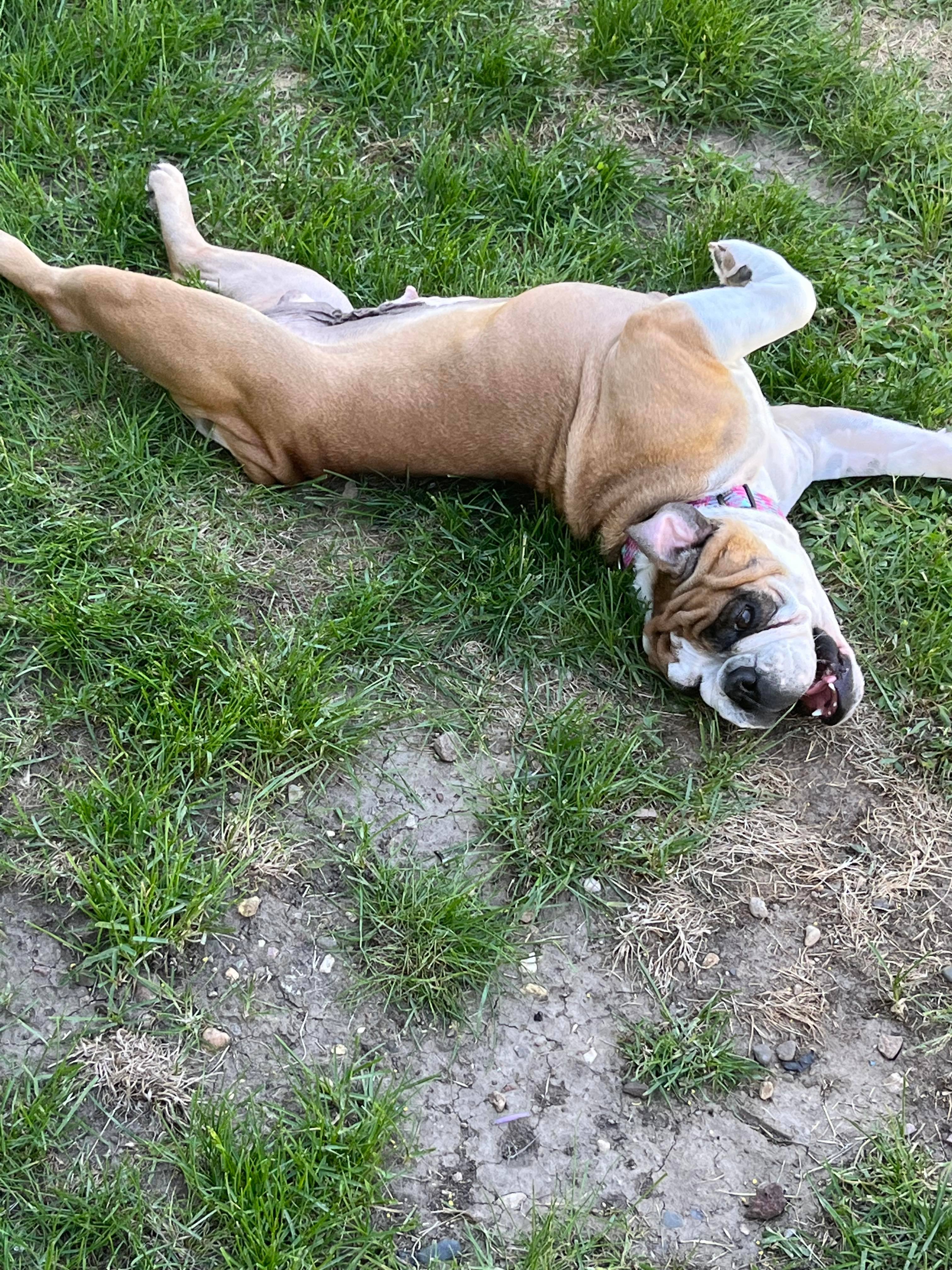 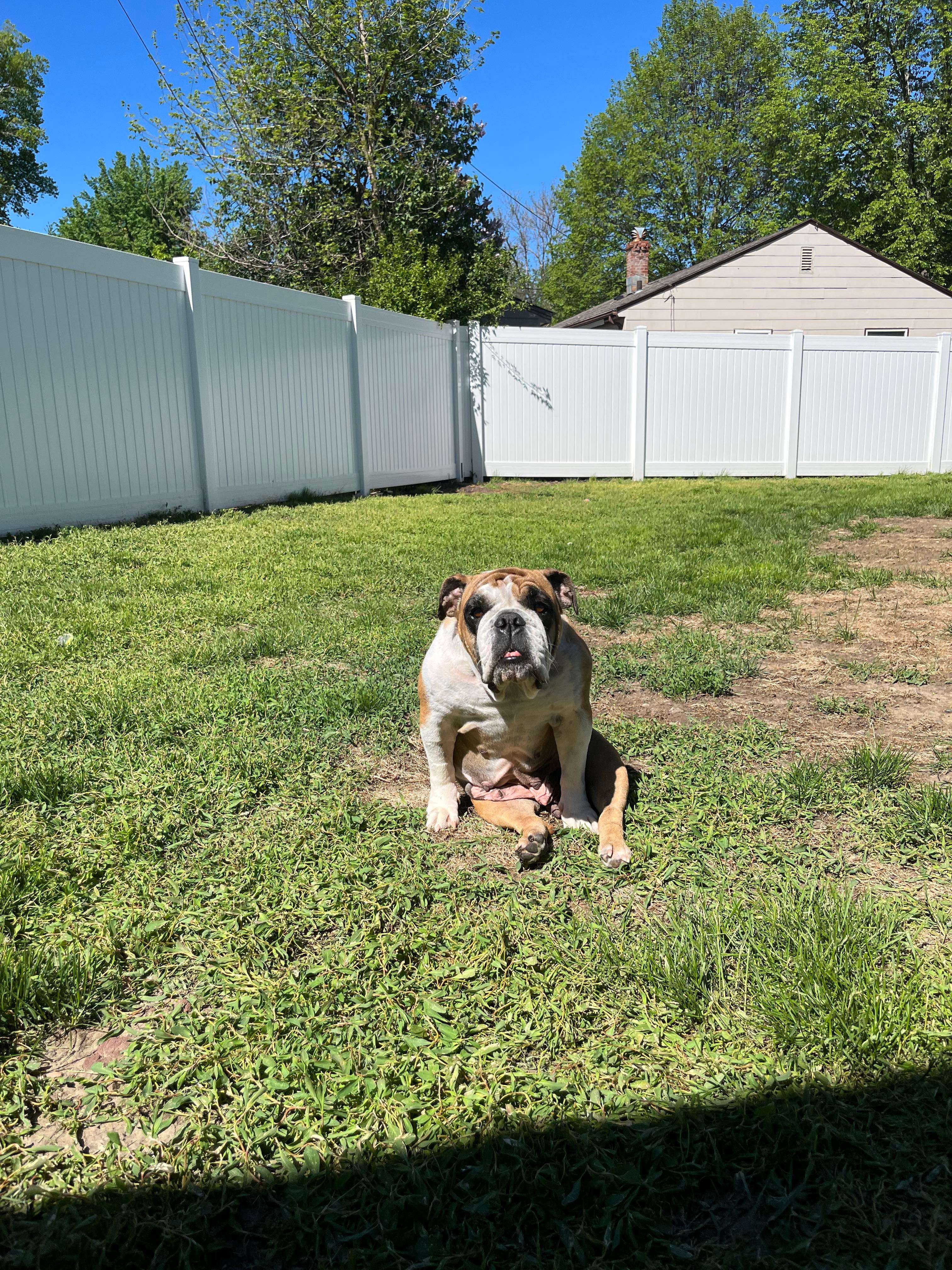 Willa arrived to rescue and was suspected of having pyometra. A quick ultrsound ruled that out and further testing confirmed a signifcant case of vaginitis. She joined a loving foster home where she began to recover. Just a few weeks later, Willa was completing her veterinary care to be spayed, when it was discovered that she was expecting. Willa has proven to be a challenge as she required a caesarean section after beginning labor. Several of her puppies required oxygen for several days after birth as well as being bottle fed while we waited for Willa's milk production to kick in. Sadly, on day 7, we were devastated to lose puppy #2, Winston, after he was smothered by Willa in their whelping box. The amount of time and labor that our dedicated volunteers have put into this little family is quite simply an extreme labor of love.

Now it is our girl Willa's turn to find her perfect forever home. This girl is the sterotypical bulldog. She prefers lounging to most any other activity other than receiving attention and she has personality that lasts for days! Her play style can be a little rough so would do best as an only dog or with dogs that are tolerable of other diva's. Willa would make a great additional to any family with english  bulldog experience or those that have realistic expectations of the breed. Willa does have they typical patella issues seen in bulldogs. Weight management will be critical for her to maintain healthy joints.

Willa was spayed during her c-section and received a dental while in rescue. She is up to date on vacciantions, preventatives, has been heart worm and brucellosis tested and is microchipped. Please complete an application to welcome Willa home today!

The Bulldog is popular dog in the U.S., but he's not for everyone. He's surprisingly heavy for his size, and if you need to pick him up, say to take him to the vet, it can be a challenge. Inside the house, Bulldogs tend to be inactive, preferring to sleep until it's time to eat again. They love children, but don't expect them to spend hours chasing a ball or running with the kids in the backyard. Your Bulldog may engage in such play for a while, but then you'll find him back at your side, content to watch the world go by and look up at you happily with that face that only a mother - or a devoted Bulldog fan - could love.

As a short-nosed breed, Bulldogs are sensitive to anesthesia. Be sure to talk with your vet about this before any surgeries are done.

To get a healthy pet, never buy a puppy from a backyard breeder, puppy mill, or pet store. Find a reputable breeder who tests her breeding dogs for genetic health conditions and good temperaments.

Like all breeds, Bulldogs are prone to certain diseases and conditions. Not all Bulldogs will get any or all of these diseases, but it's important to be aware of them so you can be informed what to look for throughout your Bulldog's life.

Overall, Bulldogs can have a lot of health problems. They are wonderful dogs, but be sure you're willing to monitor their health closely and can afford any medical treatment they may need. The following conditions may affect Bulldogs:

Dogs in our program reside in foster homes. Adoption process details can be found on our Adoption Process page. Listings are updated in real-time as dogs become available or find new homes. 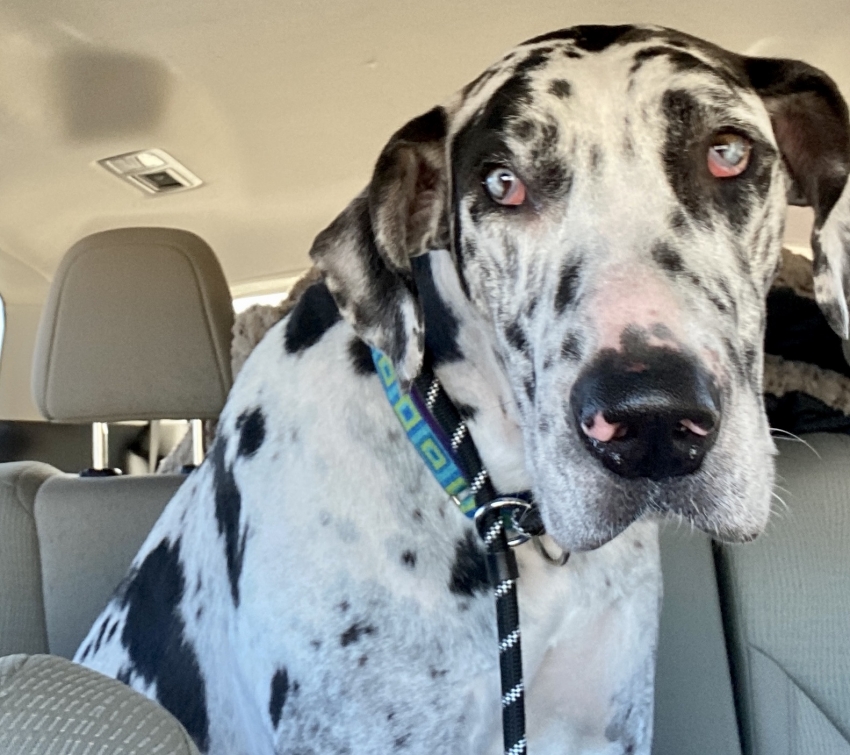 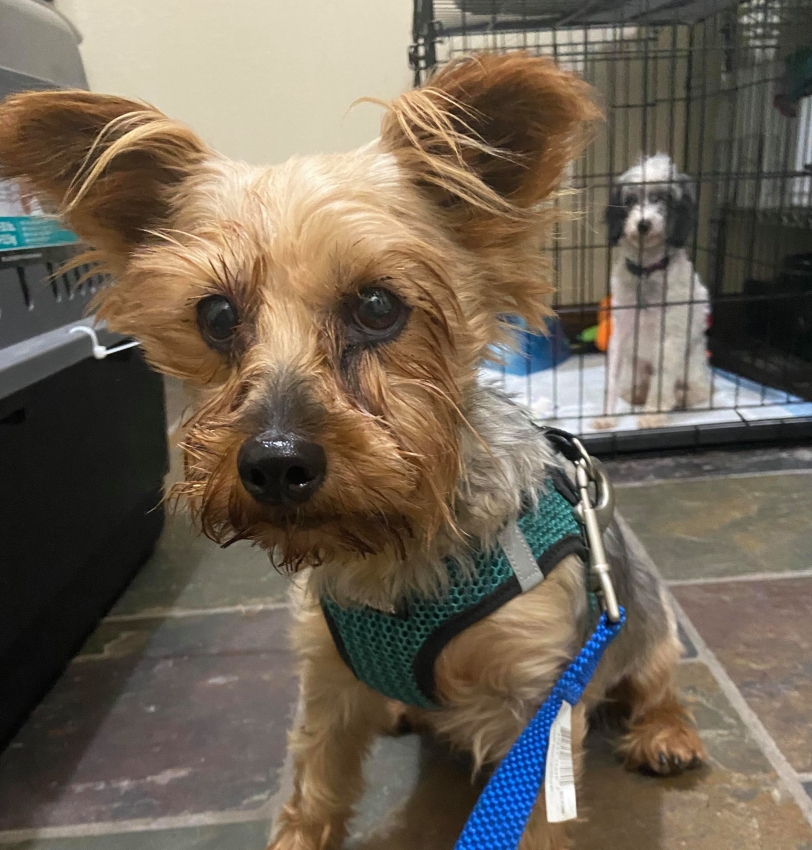 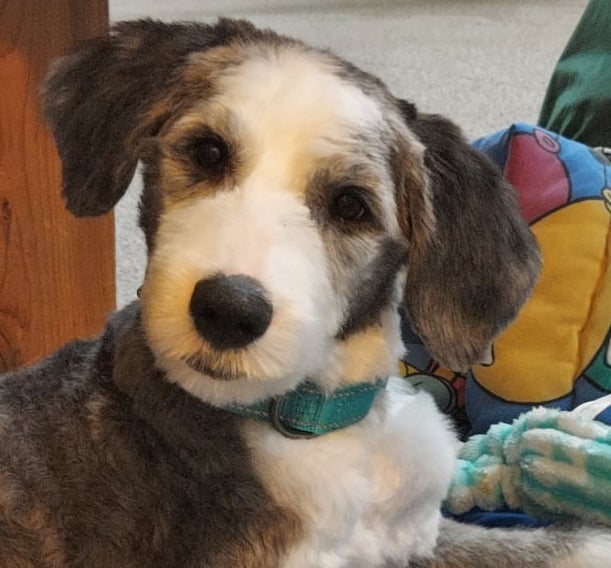